The delegation of MGSU (NRU) was leaded by the Rector A.A. Volkov. As a part of the delegation from MGSU (NRU) the BUW was visited by: the Vice-Rector of MGSU (NRU) E.S. Gogina, the Head of Department for Coordination of International Cooperation N.V. Samotesova and also the staff of the university who are actively participating at the projects of Strategic Partnership: Head of the Department Automation and Electric Supply P.D. Chelyshkov, Professor of Technology of Cohesive Materials and Concretes Department A.F. Buryanov, Associate Professor of Information Systems, Technology and Automation in Construction Department E.V. Ignatova, Associate Professor of Architecture and Urban Planning Department N.V. Danilina. Also some students from MGSU (NRU) arrived to celebrate this anniversary: S.V. Zinchenko, the PhD student of the 3rd year of the Automation and Electric Supply Department, A. I. Grigoryeva, the PhD student of the 3rd year of the Technology of Cohesive Materials and Concretes Department, D.A. Boyko, 4th year student of bachelor in "Architecture", A.I. Prokopyeva the student of 1 course of magistracy on the direction "Construction" (major: Water supply and sanitation of cities and industrial enterprises).

On the occasion of celebration of the cooperation anniversary on July 13, there was organized the event hosted by the President of the Bauhaus University of Weimar, Professor, Dr. Winfried Speitkamp. From the part of BUW the delegation from MGSU (NRU). was also welcomed by: Head of International Office Dr. Christian Kästner, Strategic Internationalization Officer Marina C. Glaser, employee of Traffic Planning and Traffic Engineering Department Dipl.-Wirt. Ing. (FH) Anne Bellmann.

The President of BUW warmly congratulated our delegation on so significant date and expressed his admiration to the joint work, done during this period of our cooperation. To confirm so long and outstanding history of the cooperation between the universities and to continue with this historical agreement, the heads of two universities signed the Certificate on the celebration of the 50 anniversary of cooperation. 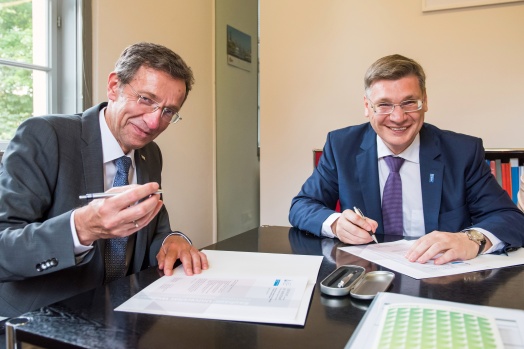 To highlight the big importance of our cooperation not only for the universities, but also for the cities in which the universities are located, the delegation of MGSU (NRU) was greeted by the Lord mayor of the Weimar city Mr. Stefan Wolf. During the cooperation, there were implemented several projects which contributed to the real development of Weimar and Moscow. 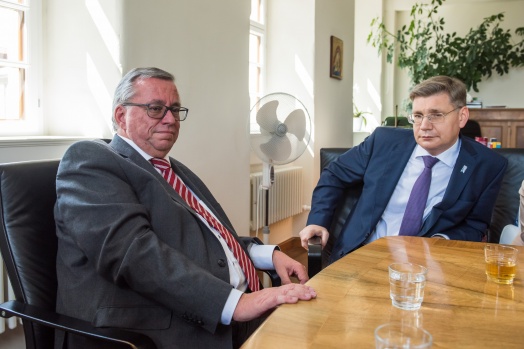 Close cooperation of four departments at each university allows to develop dynamically to the universities as in the educational, and scientific areas. During all these 50 years the universities implement their work in the field of construction materials, information technologies, engineering environmental protection, architecture and urban planning.

Negotiations on cooperation expansion also were held, the new directions and forms of cooperation were planned. Every year the cooperation of MGSU (NRU) and BUW get stronger and more and more teachers, scientists and students take part in our joint projects of collaboration. 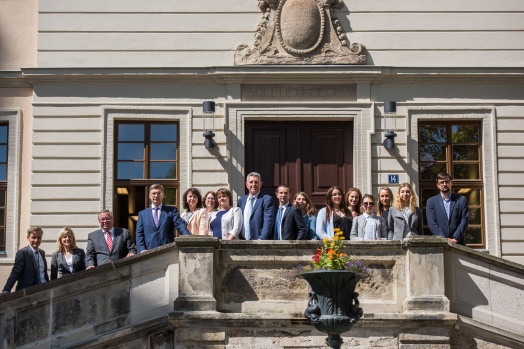 Students of our universities also take part in cooperation of BUW and MGSU (NRU) together with the academic staff. So, at an exhibition of diploma projects of BUW "Summaery 2017" dated for anniversary there were presented some works of students of MGSU (NRU): the "BIM-FM Modelling in Design of the Swimming Pool of MGSU (NRU)" project - S.V. Zinchenko, the "Development of Technology of Active Supplement for the Self-repairing Building Constructions" project - A.I. Grigoryeva, the "Rebuilding Plan of the Plant Territory" project - D.A. Boyko, the "Repair of the Trenchless Details of Pipelines from Polymeric Pipes by means of Pneumatic Punchers" project - A. I. Prokopyeva.

In conclusion of the festive events there were held some meetings with professors and employees of BUW who actively worked on implementation of joint projects in 70th, 80th and 90th of the 20th century. Our cooperation earns to be called "Strategic"!

Article on celebration of cooperation in "Thüringer Allgemeine Weimar"
← Back to list
© 08.12.2021 | NRU MGSU
In case of a reprint of text information and photos the link to the site of NRU MGSU is mandatory